A Week With Marilyn 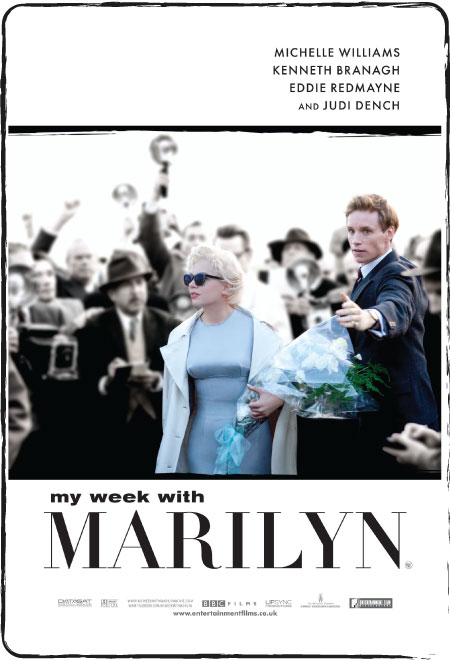 I’ve told before how crazy I am about Marilyn Monroe, haven’t I? As far as Marilyn is concerned, I’m always in… Theater, movies, exhibition, books… In fact, soon I’ll be having more of Marilyn on my nightstand. Am I boring you? If so, just tell me and I’ll try to curb my enthusiasm for a while…

Today is all about Marilyn in the movies – A Week with Marilyn, which got Michelle Williams an Academy award nomination!

Well-deserved. She nailed it. Her performance is, at some points, deceiving. Seductive. Inspiring.

I love the film. Love the colors, the cinematography, the soundtrack, the actors. The screenplay, though, I’m not so sure… If you’re a fan and have some knowledge of her biography, you can be fine with it. Since I’d read some books about her, it was nice to zoom in just seven days in her life. The information was enough, since I knew stuff beforehand.

Now if you’re looking for Marilyn’s biography, you’ll probably be disappointed. The story is told from the perspective of Colin Clark (played by Eddie Redmayne) and we’re guided by his narrative. Fantastic work! His eyes shine with his love for the film muse. We believe and root for him. Boy, do I enjoy romantic encounters… Even if they’re short. Even if only 7- day long. But eternal while it lasts. I think I’m getting too sensitive…

Anyway, it’s 7 days on the set of a movie starred by Marilyn. Not her biography… I’m letting you now  know so you’re not frustrated.

At the same time, for those who don’t know much about Marilyn’s story, the film portrays (even if for 7 days only and through someone else’s eyes) the insecure, complex woman she was. Full of marital issues, trouble with medicines, with her personal life… The kind of thing we (o.k., I’ll speak for myself) curious people, love! Getting close to the myth to demystify it… I love it!

Well, at the end of the day, there’s no way it’s not a good experience… It’s worth it to anyone!