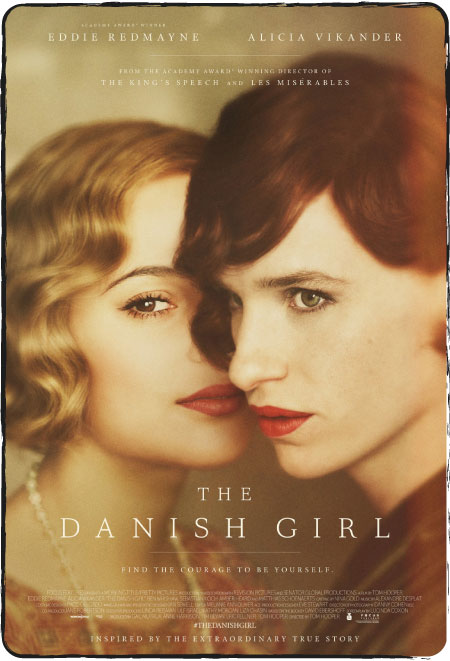 I’m completely nuts about Eddie Redmayne. He’s on my top 5 favorite actors of all times. Easily.

If he’s in the movie, I’ll buy the tickets. Don’t even bother to know what’s the story about.

As for The Danish Girl, my obsession was with both him and the director, the Londoner Tom Hopper, who directed The King’s Speech and won the Oscars for best picture, actor, screenplay and (of course!) director in 2011, I think. 2011 or 2012.

Anyway… I also love his work. I’m a big fan of both. That’s why this was my first pick when I arrived in New York. I ran to the theater. I don’t think it’s out in Brazil yet. Is it? I don’t know…

It’s based on a true story, told in David Ebershoff’s book, and it takes place in Kopenhagen in the 20s. It tells the story of Lili Elbe, played by Eddie, the first trans woman to undergo a sex reassignment surgery. Can you imagine that in the 20s? If it’s shocking nowadays, imagine how it must have been…

We keep up with the character’s internal struggle the whole time. From beginning to end. Einar (the name of the character before the sex reassignment) is married to Gerda (played by the FANTASTIC Alicia Vikander) and, after trying a dress in order to pose for a painting of hers, something comes up inside him.

This is all on the trailer, ok? I’m not giving any spoilers!

The work of both actors is filled with sensitivity. I can’t remember any of her past works … Can you? I have a terrible memory… But I was delighted by her.

The chemistry between both, the moments of silence, the subtleness of their interpretation… They nailed it!

The direction is flawless. And the photography… Can’t even describe it. The frames are always really elaborate. Sophisticated… All very sensitive and touching.

I feel that Tom Hopper is taking home yet another statuette this year. And I think Eddie is also a very strong candidate. I swear I was really rooting for Di Caprio this year – I haven’t even seen his movie, but it’s for all he’s done. I don’t know if the Academy has some kind of pet peeve about him, why is it that he never won an award. So I really support him because I find him an incredible actor (and he was my teenage crush and all). Anyway, I was really going for him, but after seeing Eddie here, I felt like it got tougher for all the contestants.

By the way, he won the Oscars in 2014 for The Theory of Everything, remember that? And here he makes us equally breathless with his acting…

Anyway, let’s wait for the awards night and see!