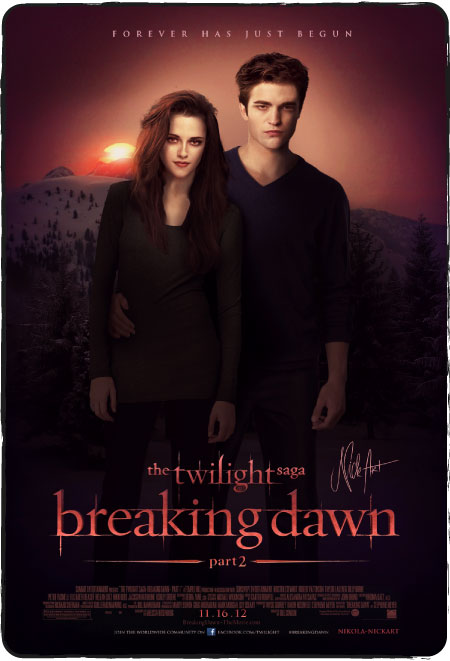 I haven’t read the books, but I watched all the Twilight saga movies. I guess he fan craze all over the world is pretty understandable. The sweetness of the love between the lead characters, how their relationship survives despite all the hardships…

It’s nice to see it all unfold. All the charm and mystery surrounding those kids. Not hard to be carried away…

When I tweeted that I was ready to watch Breaking Dawn – Part 2, I lost count of how many replies I got saying how wonderful-incredible-fantastic-the best thing you saw lately it was… That’s who the love and connection the fans developed with the series and the actors throughout all those years work! No matter what was going to be shown, it would be amazing. And I say that with all the respect in the world.

I enjoyed the other films. All of them. I really got involved with the conflicts, the love stories, everything the productions entailed. All very well-shot. Well-crafted. But always through the distant perspective of someone who sees it like any other movie. And, as for this one, I though it left much to be desired. Not really a feel-good movie. Not even the babe Edward managed to make me sigh this time.

I’m not getting much into the story, I think it’s best to leave the reduced element of surprise to the movie theater. I didn’t like the costumes, and though the cinematography was pretty weak, much inferior to the previous films. In a moment when the series was expected to reach its peak, I really think it dropped. A lot.

A bunch of new characters coming in to justify a new conflict (was another conflict necessary? I’m not sure…) made me lose my interest a bit as well. Anyway… I want to hear your opinion! As for the most devoted fans (if any of you stop by), please, I’m not trying to pick a fight! It’s just my point of view, o.k.? I just thought that something that could have been a strong, intense ending, ended up being shallow, predictable and sloppy.

Did you see it?

Was anyone there happy about the ending?