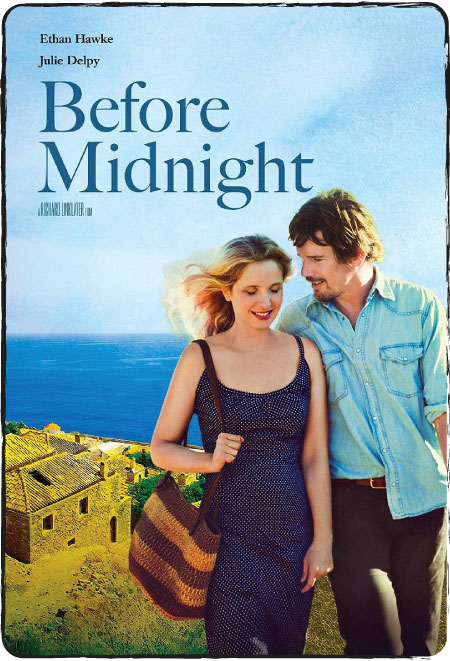 It’s been a while since I’ve last been to the movies. I watched no more than a few movies this year. First because I was completely absorbed by the play and very short of time. After that, I did some traveling. Then… Well. Going to the movies is a habit, right? Like anything else. But I started to miss it (did you miss my reviews here?) and I’m trying to make up for lost time.

Before Midnight was recommended to me by (my amazing friend and the author of my play) Junior de Paula. We have a lot in common. And, according to him “this movie should be mandatory to any adult human being”. And his suggestions are mandatory to me. Especially when he added that “it will inspire you to write a bunch of chronicles for the blog. It’s so us”. So I immediately dressed up and rushed to the closest movie theater.

As usual, he was right. Boy, does he know me well… The way the movie speaks to us… Touching. Poignant. Effortlessly so. No frills. No megalomaniac screenplay. None of that. It’s all about the relationship between the two characters. The way we can relate to it. Either because we’ve been through some of the stuff or because we’re just scared of being so at some point…

I believe the lead actors deserve all the credit. Jesse (Ethan Hawke) and Celine (Julie Delpy). They have a lot of chemistry going on. You can witness it all from very close. It’s all so real. With super long takes, her with no makeup on, completely comfortable in her own skin, you barely notice the characterization. So sensitive. Again: it’s all so simple and genuine that it makes you feel like it’s real.

The film is a sequel to “Before Sunrise” (1995), when the characters, in their twenties, meet by chance on a train and she agrees to go down in Vienna with him so they can spend a few hours together until his next flight. They fall in love and say goodbye in the end with the promise of meeting again in the future. And also a sequel to “Before Sunset” (2004), when, 9 years later, Jesse and Celine, now in their thirties, run into each other in Paris, both unhappy with their relationships, and, even if they bring their passion back to life, the film ends without us knowing if they were happily ever after.

Have you seen the first two? It’s not required, since you can go through the third without having seen the previous ones, but it all makes much more sense for those who have seen it. Their love and pain becomes even more consistent. We get to suffer together and root for them even more.

I had only seen the first one. And now I’m dying to see the second. In fact, I’ll probably watch all three of them in chronological order at any given night… I’m very interested in seeing the path a couple goes through nowadays… The forks in the road. The rocky roads. The turns. Years and years later… In a time when never seems to last. When everything is replaceable.

The icing on the cake came from my googling the name of the actors and director (Richard Linklater) for spell-check and learning that the screenplays were written by the three of them together. Didn’t know that! But almost two decades ago, Linklater joined Hawke and Julie to work on the first movie. Ten years later, the second. And now, another ten years later, the third. That’s about it… So here’s another explanation to why the actors dove into their characters so deeply. They were definitely a part of it.

Get ready for endless dialogues. Three completely verbose movies (love it!). But with pretty legit discussions… I cried, laughed, reflected. And I left the movies the way I enjoy the most: thinking.