Blue Is The Warmest Color 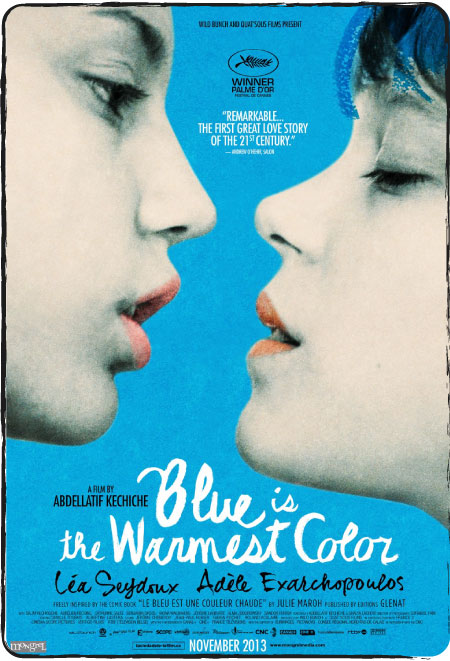 Lazy Saturday at home, so I decided to go after a movie I missed on theaters. I heard only great things about it. It got the Palme d’Or in Cannes (not only the director but both actresses as well! The first time that’s ever happened). And I hadn’t yet seen it.

A round of applause for Steve Jobs and Apple TV, who made it possible for me to rent the movie in HD for 4 dollars and watch it from the comfort of my own home.

It’s a three-hour movie. Three delightful hours. It’s about the love encounter of two women. So I must warn you – if you’re not comfortable with (pretty) hot scenes between two girls, don’t even bother! They make love on close-up. Several times. Some sex scenes are so real that are almost a pornographic record. No strings attached. No shame. No boundaries. Deep dive from the women in the story and the actresses who play them. I was astonished. Incredible movie.

First, I fell completely for the lead actress Adèle Exarchopoulos. Her character is also called Adèle. She’s a student who dreams of being a teacher and discovers sex while we watch it. She experiments. Experiments with herself. Experiments with the other. Finds herself. Looks for herself. Finds herself in her body. In the other girl’s body. Intensely and profoundly in the other girl’s body (and her smell, her glance, her company). Life starts to make sense. And there’s no take in vain. It’s three uninterrupted hours of Adèle’s (actress and character!) extraordinary performance. Amazing. I guess it’s the most beautiful performance of an actress I’ve ever seen. No kidding. Spectacular. Genuine and aggressive. Precise. Flawless.

As soon as it was over, I ran to google. I didn’t know either of the actresses (Léa Seydoux, who plays Emma, is also great! But for me the film is all about Adèle!) I needed to know where that outstanding actress had been all my life that I hadn’t seen any of her work. And I was even more shocked: she’s 20. TWENTY! And she shot all the torrid scenes when she was 18. Who saw the movie will be able to understand my perplexity… She dove in incredibly deep for such a young age. Powerful extremes that I, at 28, don’t even know if I’ve ever been able to reach. And she goes further… Explodes. It’s a catharsis on set.

I swear I could spend a whole day here talking about this girl’s work. But I think that was enough, right? A round of applause also for Tunisian director Abdellatif Kechiche (I actually read that the actresses said they suffered abuses during the shootings. That they were overly exposed, unnecessarily nude and all, but I didn’t even get deeper into it. Just focused on the final result) with beautiful takes that make us even read the characters’ thoughts. Making us witnesses of it all. Being a part of it. So many eloquent moments of silence.

I loved it. Really. So much that, when the movie was over, I opened a bottle of wine and got to write. Maybe I’ll get a chronicle from here too… Reflexive wine to toast for life’s ups and downs and ups… No easy task!