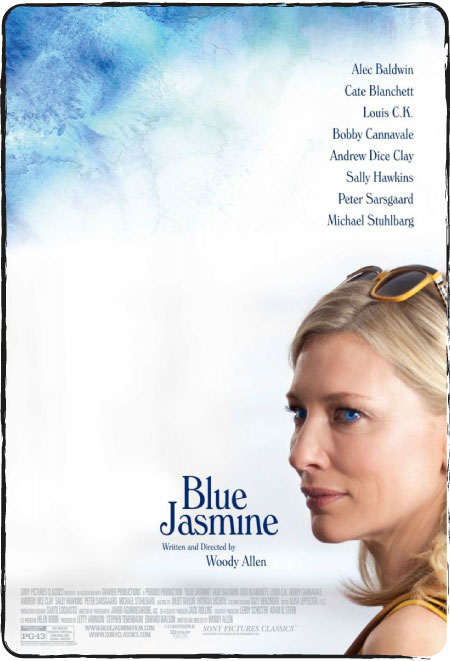 Keeping up with our culture week, today’s post is about cinema! This year I went to the movies much less than I desired. Too bad… Besides the fact this has been a busy year, I had this series invasion in my life. Remember I talked about it here? Yeah, well… But when a new Woody Allen movie is out, I’ll stop everything I’m doing to go watch it. That’s what happened with Blue Jasmine. I ran to the movies.

I really enjoyed it. Really. Definitely not my favorite Woodyallean (??), there are some others ahead of it, but it was very beautiful.

First because we have a brilliant Cate Blanchett as a billionaire who loses everything and goes ask for the help of her sister, whom she avoided her whole life. The character’s conception is itself interesting. Very interesting idea. And the screenplay is precise.

Jasmine and Ginger are adopted children. So they are sisters and at the same time they’re not. They were adopted by the same couple but followed different life paths: Jasmine (neé Janette, but changed names as “suggested” by her husband) marries a super wealthy investment banker and lives in a mansion in New York while Ginger (played by the fantastic Sally Hawkins) had two children with a blue-collar and lives in San Francisco.

Cate Blanchett is amazing. Perfect for the role. And she knows it. And we feel like she does. I read a review before seeing the movie that Jasmine is a reflex of Woody, of his finding everything terrible, finding people ugly and uninteresting and I thought it makes a lot of sense. And yet we like her (and him, of course!). More than that, we humanize it. We support them. With all those (and a few more) features that should be enough to make us hate them. One for Cate. One for Woody. Both responsible for delivering us such an amazing film and making us fall in love, judgement-free, for this woman.