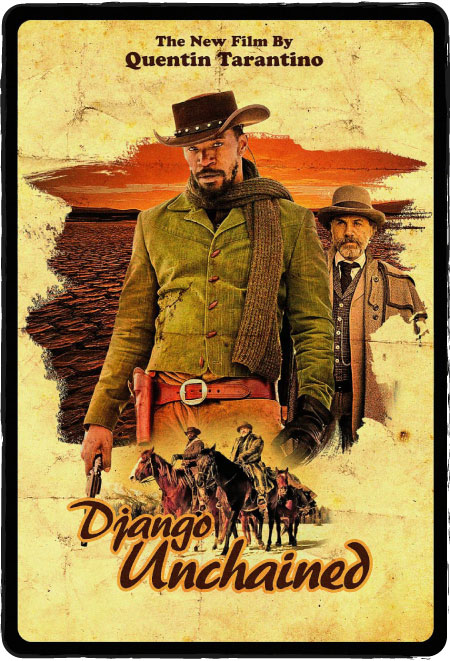 I really need to pick up my pace for this year’s #OscarsMarathon! It’s just that I’ve been rehearsing so much, getting home so tired and leaving a bunch of movies unseen. I love this time of the year, with the Oscars right around the corner, since there are so many options of films to watch. Just pick your favorites and make your list. I haven’t been taking much advantage of that, but I’ll have some days off during carnival, so I’ll be able to make up for lost time.

So let’s get to it… I watched Django Unchained last week. My expectations were high, since I went nuts with Inglorious Basterds (Tarantino’s previous film!) and my friends who’d seen it were praising it a lot. So… Off I went.

I enjoyed it. Didn’t love it though… Is much more entertainment than thought-provoking. Not really touching. I actually think I wasn’t touched at all. Yes, it was tough seeing such a raw, merciless portrait of slavery. Gosh, so tough. To think it could have been like that or worse gives me the goosebumps…

It’s the story of a slave (played by the amazing Jamie Foxx!) bought by a German bounty hunter (played by an even more amazing Christoph Waltz!) who join forces to confront this wealthy man, Calvin Candie (played by the most amazing of all, Leonardo DiCaprio! Fantastic!) to save another slave (Kerry Washington). Special mention to Samuel L Jackson, who plays Calvin Candie’s loyal servant. Genius!

An amusing hollywood western. Then there’s all that blood spilled on the screen (of course!), strong violent scenes (I spent a fair amount of time with my eyes closed!), gorgeous takes and a delightful soundtrack. No big news here, right? That’s Tarantino!

I guess the only news, which caught my attention here, was the fact that the character was driven by his love… Killing or dying for the woman he loves! ♥

Please correct me if I’m wrong, but I think this is Tarantino’s first love-driven lead character. And as the romantic I am, I sigh for heroes in love!

They were nominated to five Oscars categories, including Best Picture. So it’s a must-see!

Did you see it? Liked it?

So far I’ve seen only Argo and Django. That’s it. And I go with Argo!