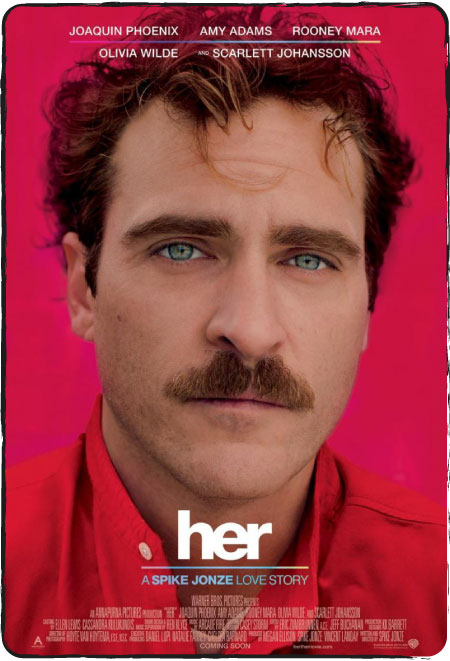 What a gorgeous movie Her is! I enjoyed it so much… So poetic. Deep. I can see so much of us there (“us” as in human beings). It all makes so much sense. At least it did to me. I went to have lunch with my family and, as we talked about the film, I learned there were people who didn’t enjoy it. Thought it was too slow. I loved it. Especially the pauses. The calm. The time between every breath. Every sigh. Every feeling.

Joaquin Phoenix (one of my favorite actors ever!) is brilliant once again. He plays a depressed letter ghostwriter who’s having a hard time getting over a breakup. Think of a melancholic guy, unhappy with the world, living in autopilot… That’s him.

Or at least it was, until he bought a new operating system for his computer, provided with AI that reads/interprets its owner (voice tone, sighs, breath, responses…) in order to find out how to be useful to him.

The system has a name. Yep. Name and voice. It’s called Samantha and the voice is none less than (the magnificent) Scarlett Johansson’s. Samantha, or OS (call it what you want! ;)) not only puts together her owner’s virtual life, but starts affecting his real life as well. A relationship unfolds. Yep, between a human being and an operating system. What? Yeah, I know.

Sounds bizarre, right? It is. But it makes an awful lot of sense. And Scarlett managed to surpass all my expectations and be more desirable than ever without even making a physical appearance. It’s just her voice. You have to watch it in order to understand it. I won’t even try to explain…

Joaquin Phoenix wasn’t nominated, but he nailed it. Perfect. Boy, do I like this guy… I think he deserved to be among the top five. Same for Scarlett. Two geniuses. Amazing encounter. Enticing without even sharing a scene. Wow. Congratulations are in order for both. Amy Adams is also pretty good playing a more ordinary character, something a bit different from what she’s been doing lately. I love to see her characters unfold. How far she can reach. And this time she brought less of it. More pauses. Less elements in the composition. More simplicity. Naturality. Lightness. I like that.

And it makes us think… Reflect… Will we end up like that? Will social interaction become unbearable in the future? Will we become so unsympathetic to each other? I don’t know… So many things became clearer… There were many lines I felt like writing down and using in our chronicles later! So, yeah, I really liked it!

What about you? Have you seen it?

Less than a week until the Oscars!