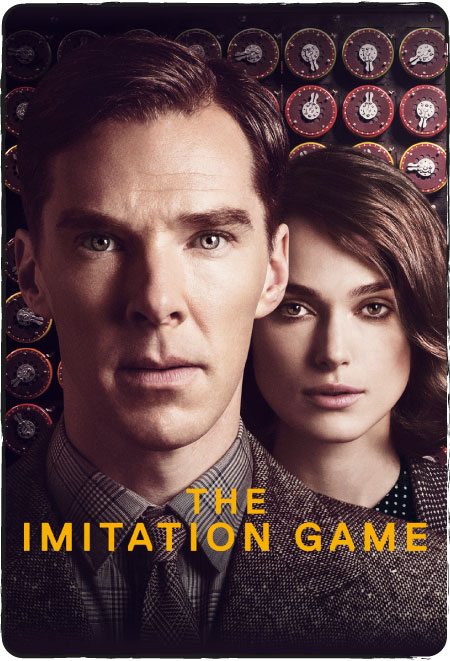 Featuring the first actor I think is able to fight Eddie Redmayne (The Theory of Everything) for this year’s Oscars..

I wasn’t very familiar with the actor or the character. I got to the movies without many references – and I loved what I saw!

The film goes through Turing’s secret work, along with his crew of cryptologists, who (SPOILER!) saved millions of lives by deciphering the code of German machine Enigma. But they have a long way to go before they get there.

As a computer pioneer, Turing’s history is pretty juicy itself. (MORE SPOILERS) Gay in a time and country where homossexuality was a felony and with extreme interpersonal relationship struggles. Quite genius-esque, right?

True story. I like it from the start. I love getting out of the movies feeling smarter. With an extra history load on my HD. And the actor’s work is exquisite. He is 100% convincing in his awkwardness, shyness, genie and eccentricity. Only that should be worth the ticket.

BUT the film also features my muse Keira Knightley as Joan Clarke, another brilliant mathematician and the only woman in Turing’s decoding team. She plays it beautifully, as always. She works as a counterpoint. Brings lightness to the story. Makes it more colorful.

Keira was also nominated, as best actress in a supporting role. Then there’s the director, best picture and some other stuff.

I don’t think it’s Oscar material (if Eddie Redmayne didn’t exist, it definitely should make it as best actor!) but it’s really worth the ticket!

It’s the guy who helped the allies win World War II AND invented the world’s first computer. So we definitely have a lot to thank him!

I want to hear your thoughts about it too!

Has anyone seen it?

What’s your favorite for the Oscars so far?