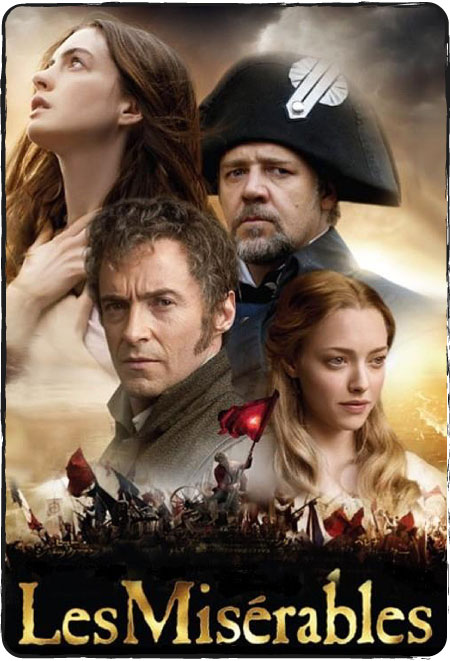 I’m taking advantage of my carnival days off to move forward with my to-watch list. Two weeks until the Oscars (February 24!) and there are still many movies left to see… I’ve been better at that!

Yesterday I watched one of the most well-known and played musicals of all times (it reached over 60 million spectators on the theaters!) in a new movie version. I’d read some interviews where the actresses talked about the whole process and I was really looking forward to seeing it.

It’s a two-hour-and-forty-minute movie. Yes, it’s long. But incredibly beautiful! If I begin by saying that all of its 158 minutes are sung, that all dialogues were replaced by stanzas, I’ll probably scare some of you away, right? Except for the true musical lovers, this kind of information can be a bit frightening… I was a bit frightened! But also pretty curious about seeing the actors singing “live”…

So, the movie is entirely sung. Except for a few words. And it was all sung there, during the scenes. No studio. One of the interviews I read before watching the it was with Amanda Seyfried, who told that in Mamma Mia (another musical she played!) she sang for two days only, in a studio, and then when they shot it, all she had to do was lip sync. This time, though, it was much harder, since she had to sing for real on set. Shooting image and sound. The whole thing! How brave!

And it really added to the final result… I’m not a singer, don’t know much about tune and tones, so this is my opinion as a spectator who gives in to the sensations a movie brings up… Nothing technical. Completely emotional. And I thought it was fantastic!

The performances were even stronger with such a genuine interpretation, the characters’ “here and now”, with flaws, special touches, breathing, sighs, tears and unexpected details that could have only been added by the them at that precise time. In the heat of the moment. Lucky us Tom Hooper (the director) wanted it like that. I got us amazing moments to watch.

An entire paragraph to the astonishing Anne Hathaway. She sings so beautifully… God… The director puts her on a close-up and we are hypnotized for a few minutes while she sings. Wow. So difficult to do what she does… And, boy, she does it well. My favorite for the award of best actress in a supporting role! Btw, that happens a lot during the movie, the close-ups on the actors, making it just us and him playing the song. Again: brave! And successful!

Besides Anne, I loved the actress who plays Éponine, Samantha Barks. Another amazing voice, delightful to hear. Loved this girl.

And the icing on the cake are the kids’ performances and voices: Daniel Huttlestone, who plays Gavroche (a very smart and brave homeless boy!) and Isabelle Allen, who plays Cosette as a child. That girl nailed it! Beautiful scenes, great voice. Fantastic!

At the end of the day, not all of the actors are professional singers, some nail it, some not so much… But the mix (again, to me, as a lay spectator, driven by her emotions) worked pretty well in the end. It touched me very deeply. Not to mention the cinematography, art direction, characterization… All really beautiful and over the top. The way a musical of such proportions should be… I love it. And I highly recommend it.

I left the movie bursting into tears!