Best pizza I’ve ever had

When we think of the United States, we think of pizza, cheeseburger, hot dog, cupcake, cheesecake… Don’t you agree? At least the people who come here to see me are always craving Shake Shack or Burger Joint. The feeling I have is that they sort of open the cage, finally feel free to eat all kinds of terrible stuff they deprive themselves of in real life. Does that make any sense? That Sunday kind of vibe? That guilt-free pizza order (after all, it’s Sunday!), only more intense. Heavier. After all, a trip is a much stronger excuse than an ordinary Sunday. So I feel like people really dive into a sea of calories.

Since I have always been pretty detached from any food restrictions, never deprived myself from anything, I don’t feel that eagerness to go after those treats. I’ve probably had pizza about two or three times throughout these four months here in nyc. I’m much more into looking for new restaurants, getting to know the most recent talk of the town, having some good wine, a great burrata… Oh, burrata… Anyway… I usually go for hot dogs or pizza late hours (when there’s no kitchen left open!) and cheeseburgers when I’m taking my guests on tourist rides. But it’s not the kind of stuff I usually crave.

But the fact that I don’t crave it and that I’d much rather go after the best burrata than the best pizza in town doesn’t mean I don’t enjoy it. I LOVE pizza. I’m really into the Sunday pizza tradition. It’s just that in my food love hierarchy, it’s a little behind. In a place with that many options, I feel like having pizza and cheeseburger is kind of in vain, you know what I mean? Hope I’m being clear here…

I’ve always thought that pizza and cheeseburger are both no-brainers. Ok, some are better than the others, tender meat, melting cheese and all that. But still, it’s kind of the same deal every time. Harder to mess up with that kind of stuff. Also hard to surprise. You kind of know what to expect.

Or at least thought you knew!

Now I know that I actually had no idea!

Last weekend, Thaila (Ayala, my nyc gift! ♥ Who manages to be more of a bottomless pit than myself) suggested we had some pizza. She said the name of the place, asked if I’d heard of it (I had never) and put it on google maps (we can’t live without it!).

So we headed there. And she started to explain to me the experience I was about to have: “get ready for the best pizza you’ve ever had. No kidding!”.

Artichoke (for those who don’t know!) is a vegetable. And the name of the place. So Thaila instructed me: “You have to order the artichoke pizza! I’ll order two, one each!”. Me: “But… Artichoke? I’m craving some sausage, with loads of cheese. I’ll order one of those for me and a try a bite of yours!”. Her: “Dude, don’t make the same mistake I did. That’s exactly what I did when I first came here and after the first bite of my friend’s artichoke slice, my portuguese lost its meaning entirely”. Ok, Thaila. You won!

She promised it was super cheesy, and she was so assertive (our taste is pretty similar! Two kids in the kitchen, basically!) that I went along. Two artichoke slices, please! Fingers crossed… 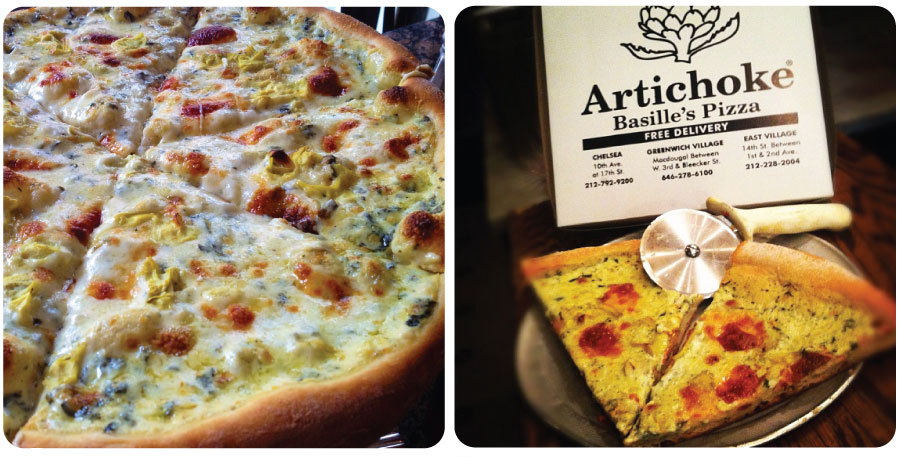 And you know what?

I can spill every existing adjective and yet I won’t be able to convey the delight it was to have that pizza. Impossible to explain. And I know you’re all thinking I’m exaggerating (I mean how come an artichoke pizza is the best pizza ever? My father always says that pizza is all about cheese, anything else is a frill!) so I won’t even try to put it in words… I just ask you give yourselves the chance to get to know this place and try this piece of heaven!

Has anyone here ever tried that pizza?

Please tell me you did! And, if so, help me on the comments to explain how incredible it is…

If you haven’t tried it yet, put it on the top of your nyc’s must-gos!

I’m no longer saying that all pizzas are about the same thing. Never again. I promise.

In fact, after Artichoke, it will be hard to find a pizza that fulfills me so deeply…

Thank you, Thaila! I owe you that!