Eat, eat and eat! Gosh! Guess that’s what I did the most in this city. I had with me two friends who love eating as much as I do so we really splurged…

I’ve told you here about my good-restaurant-madness when I’m traveling, haven’t I? And that’s exactly what I did this time! I asked four friends for a list of their favorite spots: one, female, my age, kind of hipster, alternative, who lived there for a year; a male friend, a little older, who masters the travel subject and is a Paris lover; a younger friend, who moved to Paris on the winter and enjoys fancier places; and a friend who’s a model, has lived there for years now and has all the insider tips. So, yeah, a real mix. Then I compared all four lists.

I went for all those recommended more than once. If it was good enough for the foodie and the hype hunter, it became mandatory! So that was my motto… I ranked the places by how many times they were mentioned (some of them made it to virtually all lists). Went to some places that were closer to where I was that day and some others didn’t make it to any of the lists, but I passed by and felt like going in.

I guess that’s important too, being open to creating your own Paris… It’s good to have a program, but it’s also great to let the city lead you… Take chances. Anyway…

Now, off to my list of ingested calories on this trip! Ready?

A bit of everything I ate in a week at the City of Lights: 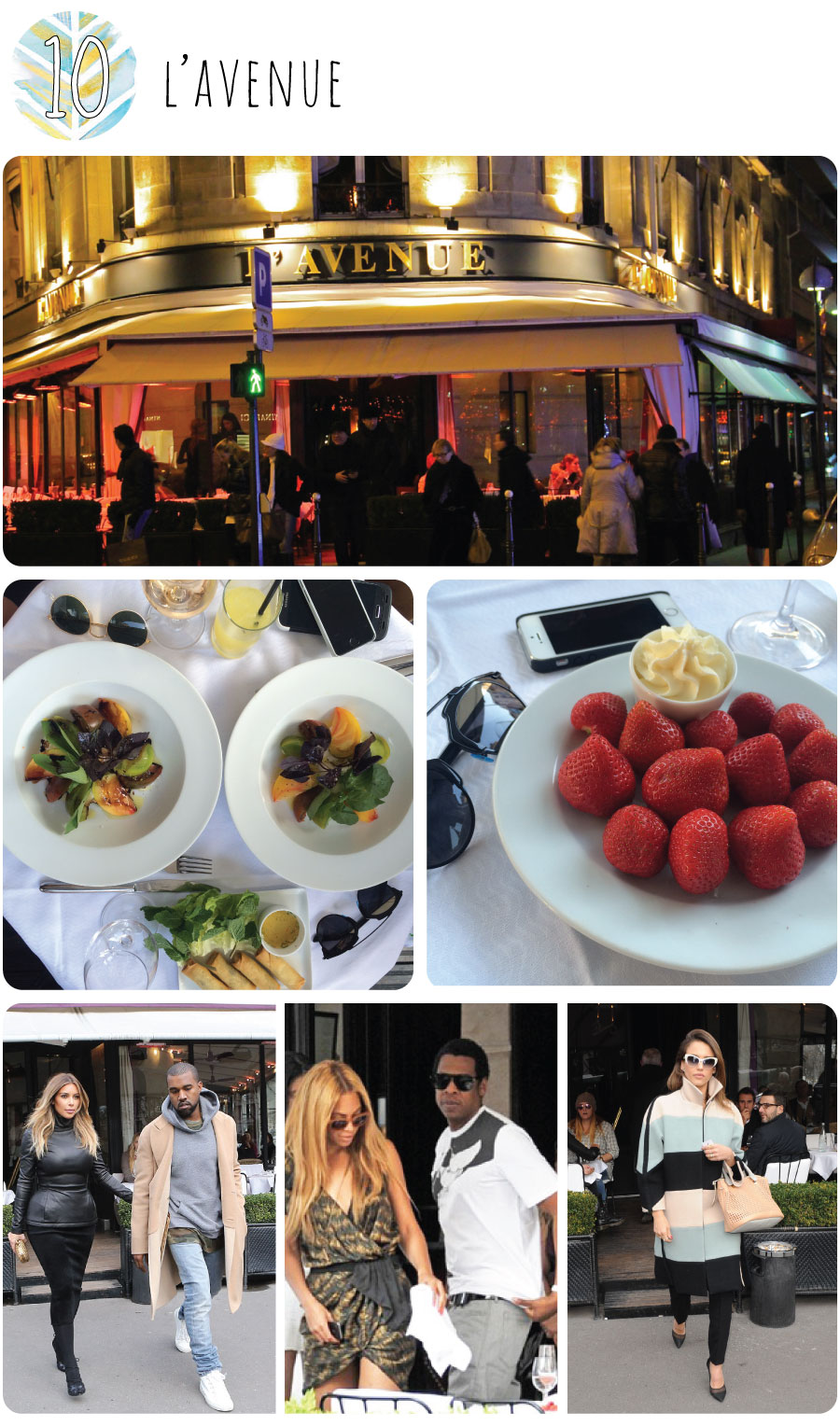 It made it to three out of the four lists. Everyone is talking about this place. A friend told me he’s ran into Rihanna and Gisele around. It’s at Avenue Montaigne, always open. I went to try it first thing. And I didn’t have a good experience… The place is super delightful, on a corner, super charming. We sat outside and people watching is part of the experience. But I found it too pricey for some less-than-ok, cold pasta. Yes, I ordered a pasta dish that was ice cold on the inside. Something like heated-at-home-in-a-half-baked-microwave. So, I guess I was out of luck.

And the people were in a completely see-and-be-seen vibe, all dressed up for lunch, completely ordinary food and pretty pricey. About 80 euro per person, without drinks! Not my best pick! 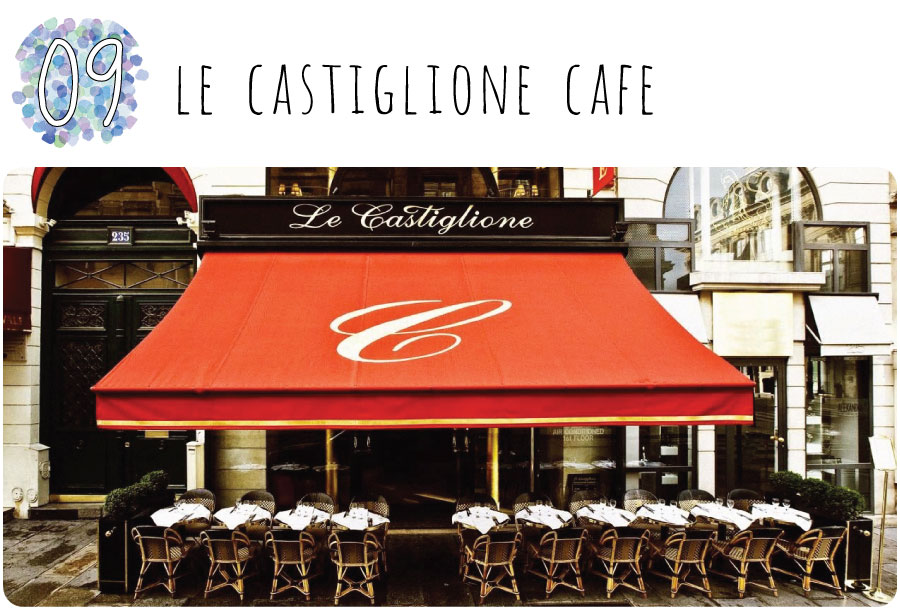 Another one where I was VERY unfortunate! Wouldn’t go back… Because if I’m disappointed once, it’s very hard to make me go back… But it made it to one of the lists I had, as well as to my travel companion’s list, as recommended by her sister, who’s lived there. So off we went. It appears to be the pick for a shopping day at St Honoré, since it’s quick, good food, and it’s on the way. The “quick” and “middle of the way” parts were true. As for the “good”…

I ordered a Croque-Monsieur that arrived looking no better than an old ham and cheese sandwich. Hard to cut. Hard to eat. Almost didn’t taste the cheese. Terrible impression!

My friends who ordered salad enjoyed it though!

So, if you try it, tell me if you think it’s worth another shot! 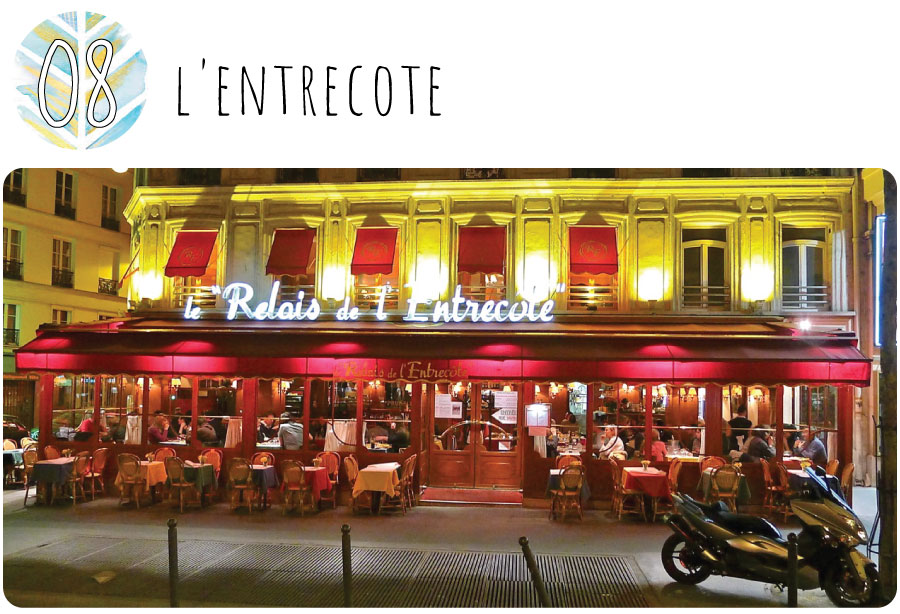 Know that restaurant I mentioned a thousand times? That has an only dish? Steak with a heavenly sauce and fries? So, this is the original… And maybe that’s why I felt like it’s better than the others! Love it! 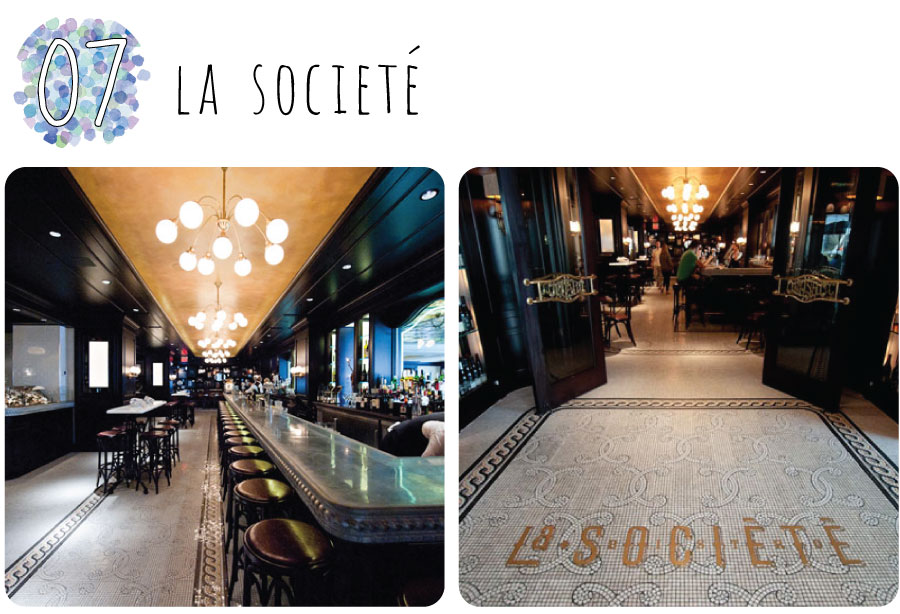 Another one from the rich and famous list. I went to try it the day I was walking around Saint Germain. But we didn’t have reservations so we had to wait a bit. They told us the kitchen had too many orders, that we could sit, have a drink and order in half an hour. They offered us an amazing table by the balcony, and it sounded really really good, but I honestly wasn’t up to it. It was the day of Beyoncé’s concert. And it didn’t want to waste another half hour in Saint Germain.

We moved to Cafe de Flore. Right next to it. Our idea from the start was to go there for dessert or a glass of wine after lunch. It was also on the list! But we ended up going for lunch there! 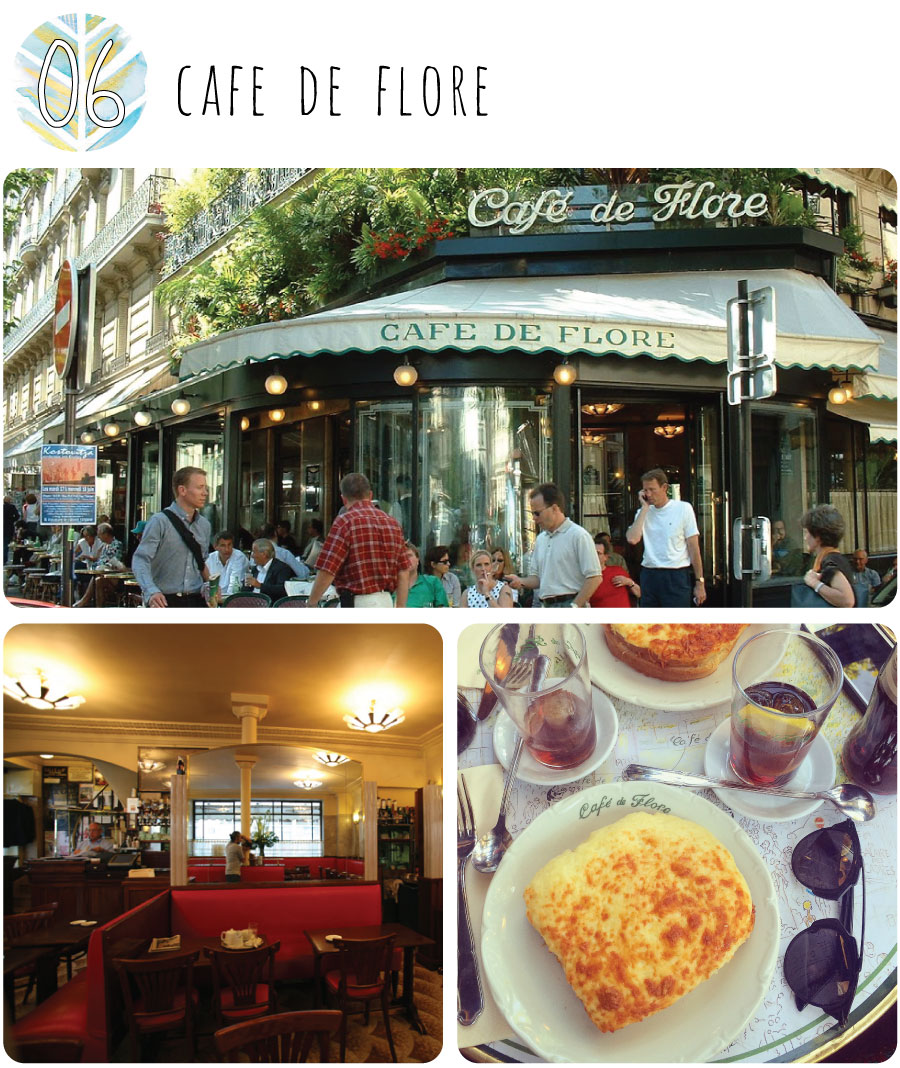 I had been there already, at my first time in Paris. Loved it. I’d read that it was Sartre’s favorite spot in town. That he used to spend his days at the tables outside. So it was one of the first places I tried. And this time I brought my friends to try it too!

I tried another Croque-Monsieur to erase the bad impression left by the one Le Castiglione Cafe and it worked. I was served a delicious Croque, with loads of melted cheese, the way it should be.

It’s always packed (tourist spot, that’s it) and the tables are pretty close to each other. So you almost touch the other people while you eat.

Try to get a table outside, order a glass of wine and do some people watching! 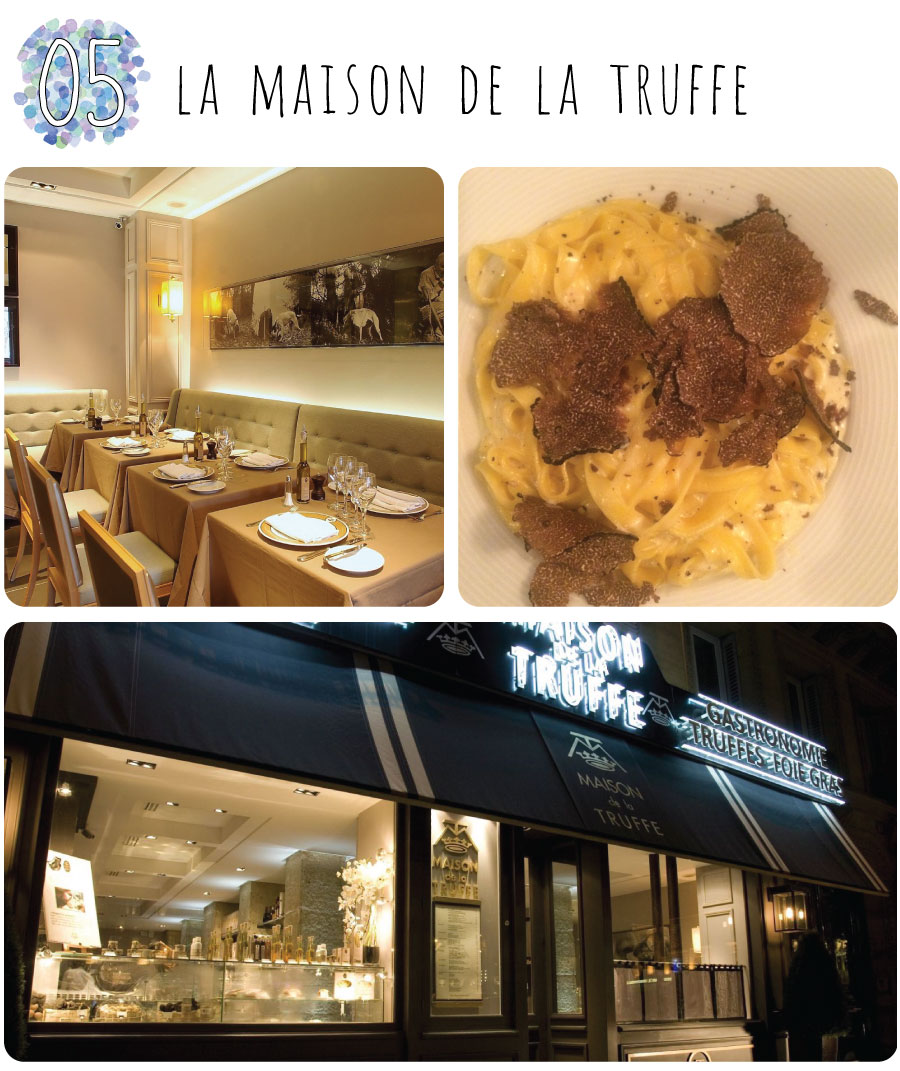 One of my friends and travel companions is mad about truffles. She got to Paris talking about this place. I love it too. But it’s far from being one of my favorites… I always prefer the more local, less touristy spots. But we went to check it out anyway.

Good. Everything with truffles. Has a great market to buy olive oil, cheese and a bunch of truffled spices and take them home with you. But it’s more of a traditional restaurant, older crowd, more silent. Good for the truffle lovers. Go there to eat, and that’s it! 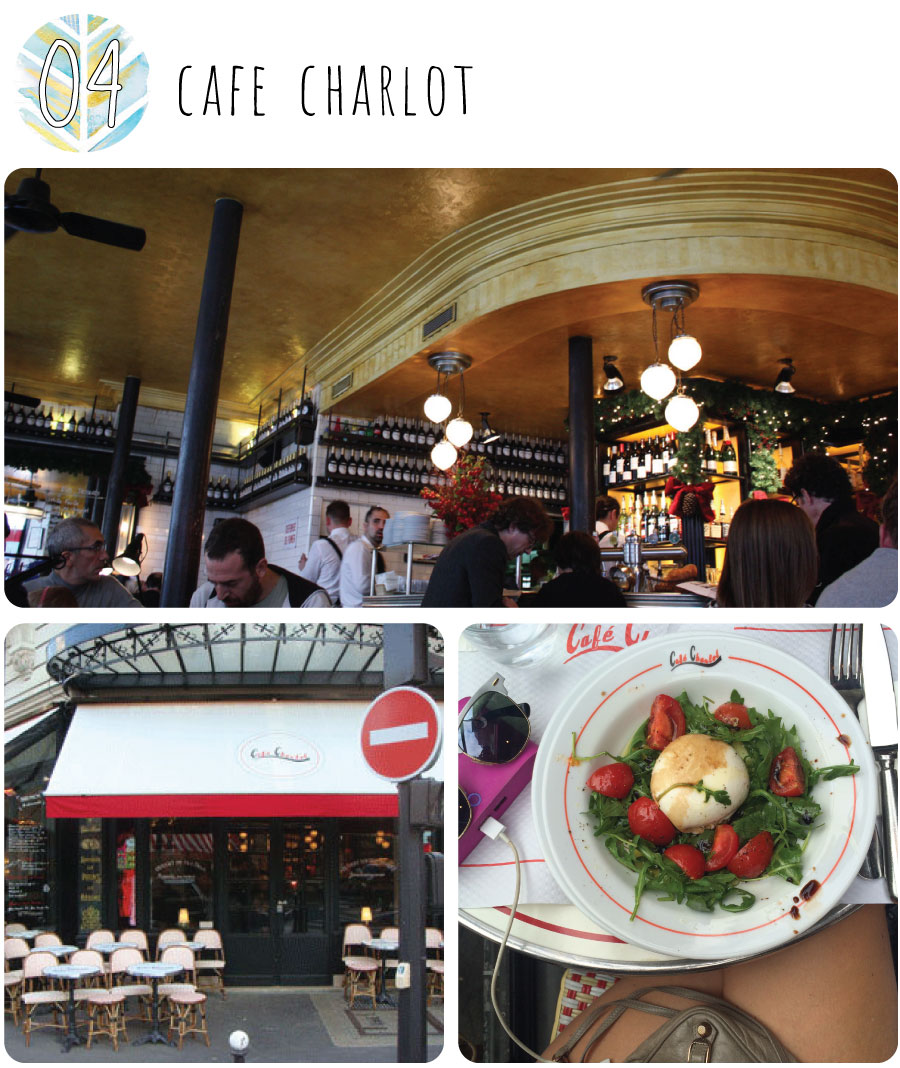 This one made it to three of the four lists! I also suggest you get a table outside (always!) to people watch. It’s at the Marais. Coolest-borough-of-all. I’ll talk more about it in our Top 10 Things to do.

Delicious. Pretty good french food. I had a delicious Caprese and a pretty good Entrecôte too! 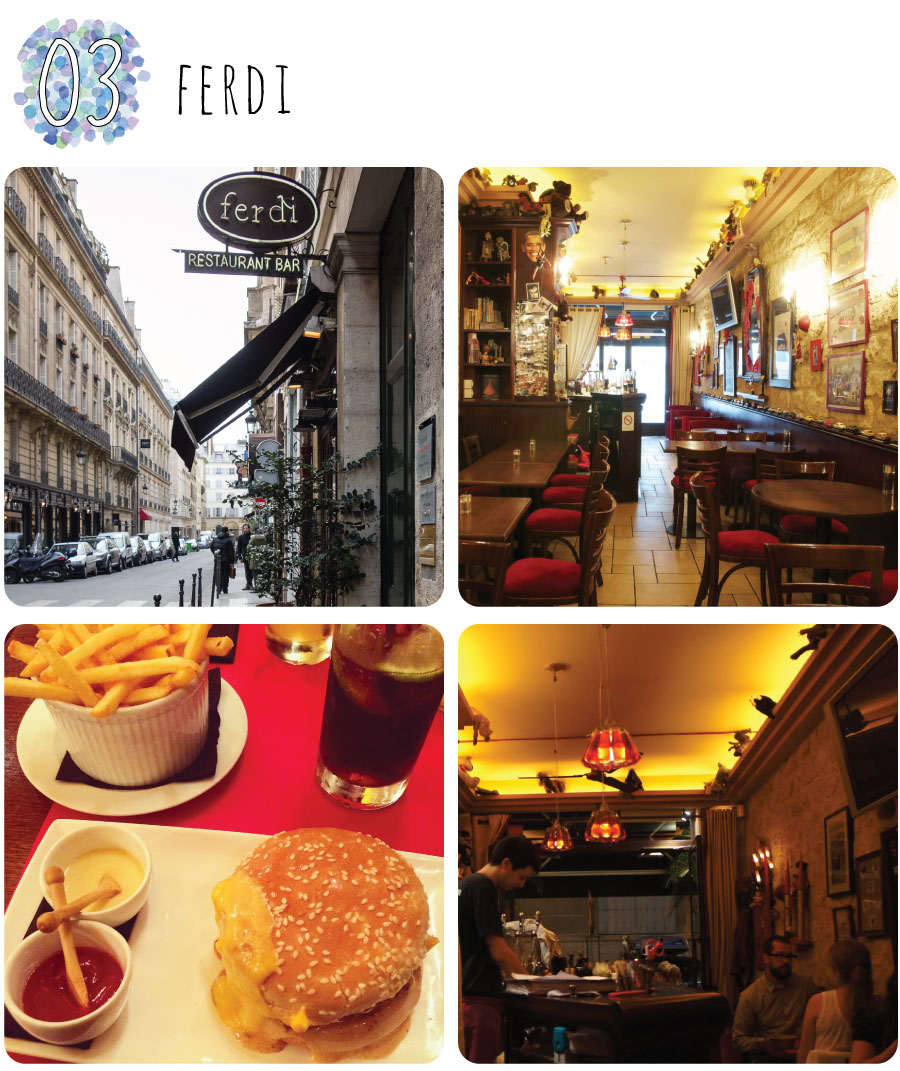 A friend who lives in Paris told me they had the best burger in town and churros for dessert. Do you need any more reasons to try it? I don’t!

We went there on our first day – it was right by the hotel. But it was closed. They’re open on weekends only. From 1:15 p.m. We got there on Saturday (no reservations) at 1 pm. And there was a line at the door. Small line, but still. We stayed in line and got a table the moment the doors opened. But I barely could believe how packed it is the moment it opens. And still, people outside. I didn’t know it was that hyped up…

The restaurant is tiny. The decoration is super, super cute. You feel like you’re at an antique shop. Full of antiques, pictures and rare objects everywhere. At the table next to ours were Sofia Coppola, her mom, boyfriend and daughter. That equals hyped up place.

Then I find out that during fashion week you can’t eat anywhere without reservations, you practically have to elbow your way to the table since it’s all always packed. So we were pretty lucky. We got a seat the moment it opened. But, ok, when we were having the last bite of churros the owner was already by our table politely inviting us to leave due to the long line outside. That’s life…

Their Cheeseburger is unbelievably good indeed. There’s this sauce I can’t explain very well why it’s so special. I don’t know if it’s the best in town since I don’t know much around. I’ll leave that for the experts. But it is definitely a delicious sandwich! And the churros… Well, we ordered a second portion (of six!). Don’t have to say much, right? 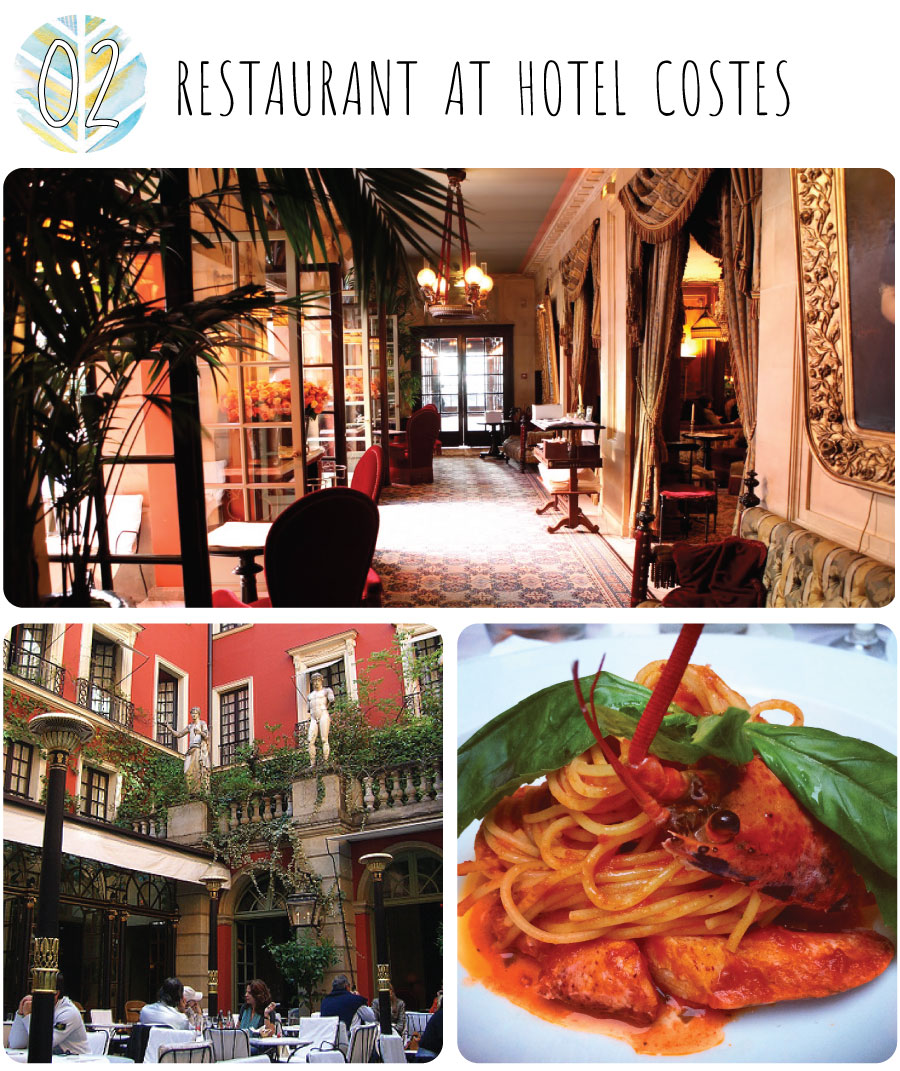 Amazing restaurant. Also pricey. But it was worth every euro! We sat by this delightful patio, the waiters and waitresses looked like they just got out of a model casting, pretty well-lit and delicious food.

We went for a late lunch on our first day. Like 6:30 pm. Time not for lunch nor dinner, you know? That’s why I think we got a seat so easily without reservations. And we stayed there for a long time and by 7:30/8 pm it started livening up. The natural lights were replaced by candles. And a small waiting line started to form outside. Beautiful people only. And out burrata + pasta combo was special! 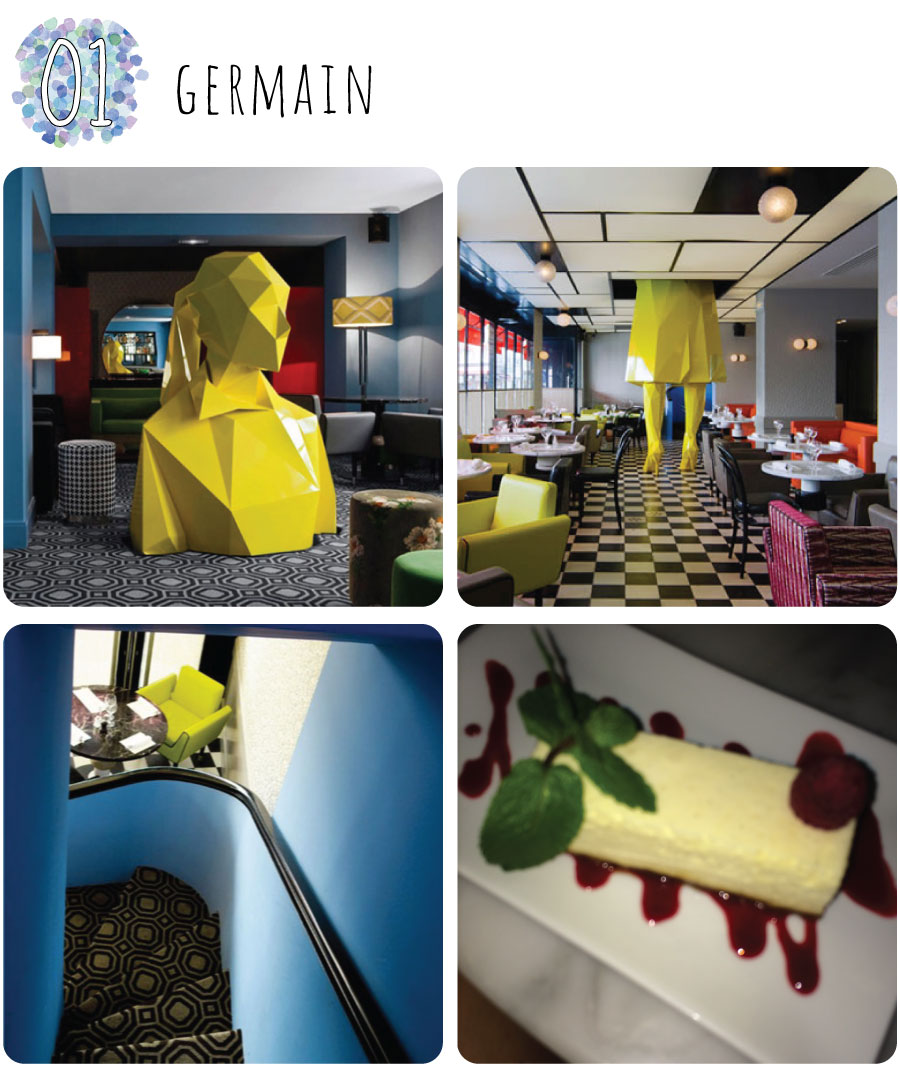 Loved that restaurant! We went for dinner. No reservations. But we sure smiled a lot for the guy at the door and he only had us wait about five minutes at the bar. Sweet.

Pretty cool decoration! There’s a giant yellow doll crossing the restaurant’s two floors. It starts on the first floor, but, to see from the waist up you have to take the stairs. Super instagram-friendly!

We ordered salmon, following a friend’s recommendation (HERE!) and we really, really enjoyed! Best salmon I’ve ever had!

Amazing cheesecake for dessert. Beautiful people only. There’s some music playing, they have a DJ at the restaurant and the later it gets, the louder it gets. Amazing! All amazing! A must go!

Now the list of the places I didn’t make it to and felt so bad… Six days is too little time for all there’s to do AND eat!

I’ll list them anyway, so I can also come back here and not miss it again the next time! 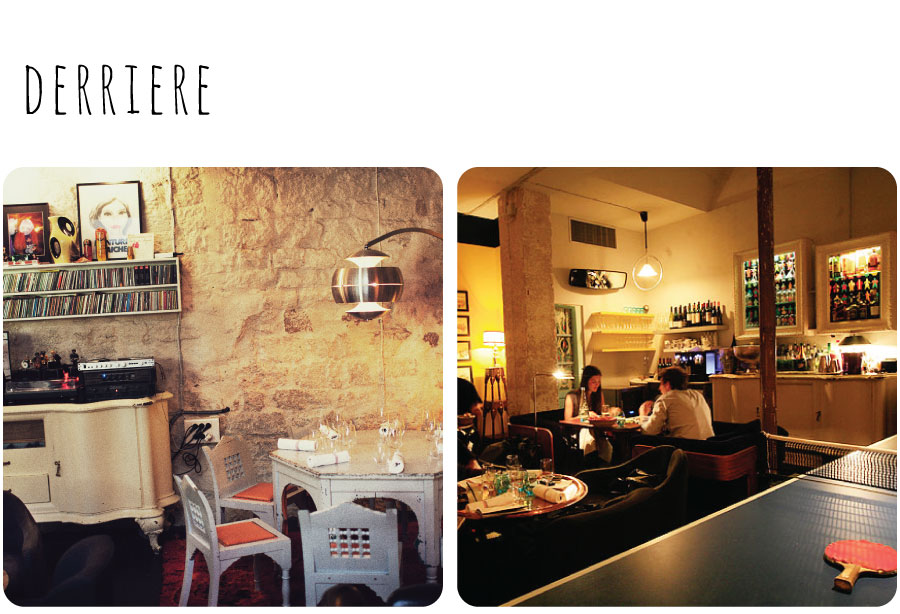 This one made it to ALL of my lists. All of them! We went there on our last day and, when we arrived, the kitchen was closed. Can you imagine how inconsolable I was? So disappointing…

I didn’t eat, but I got there to see it and it’s awesome! It’s a house. With all the rooms. Super cool decoration. Then you pick where you want to eat: on the bed, on the ping pong table, on the study desk, on the couch… It’s so, so cool.

And at night it appears to be cooler than at lunch. Pati Bonaldi suggested we had dinner there. Said she heard it was super lively and turns into a little party… That a bunch of friends recommended it to her. Missed it so bad!

Now I have a reason good enough to go back! 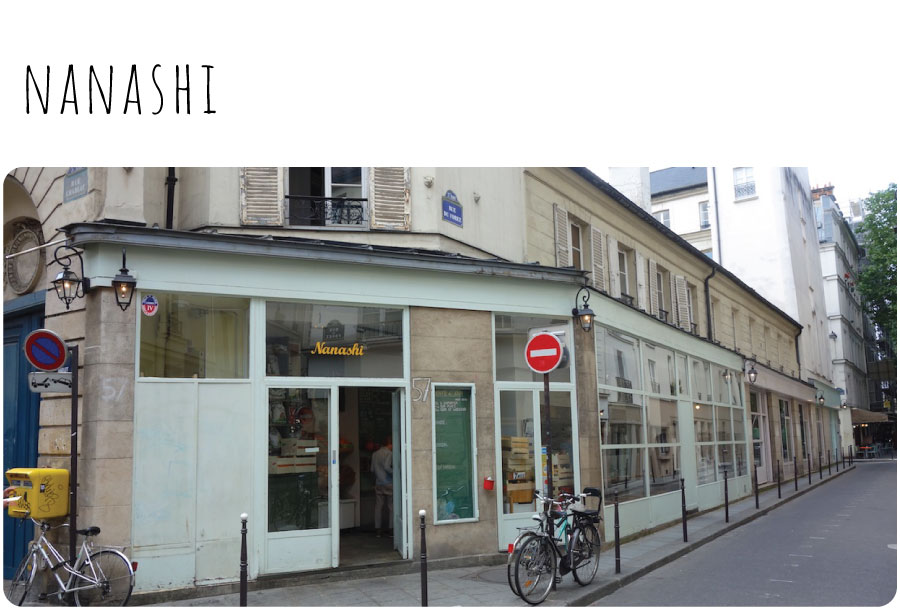 Another one that made it to ALL the lists. We had that must-go list and searched on google maps the ones that were closer to us. And Nanashi was always far. Didn’t fit in our schedule, I guess. Another one Pati mentioned. She arrived in Paris talking about these both. And both were in all the lists and I left behind… Bummer.

Oh, apparently it’s a healthy food spot (let’s hear it for the green juice crowd!) full of cool, beautiful people around. Super hype. So if you’re in Paris before I go back, please go! And tell us afterwards!

Was I able to convey how much I ate in Paris?

And I didn’t include some 3 or 4 spots I went just for cocktails – and loved! But I’ll list them in another post. So I won’t overwhelm you with all that information!

For all the calories ingested.

I’d do it all over again…