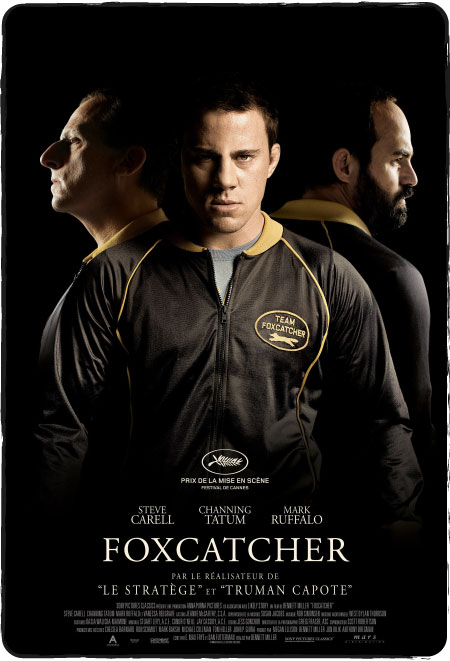 Alive and kicking with my Oscars Marathon! Am I annoying you with this sudden film avalanche? Am I? It’s just that the Oscars are right around the corner… So I get really psyched about it! It’s the same every year… :/ And yesterday was for Foxcatcher. Pretty slow movie. So sad. So long. But really beautiful!

They were nominated for Best Director, Best Actor in a Leading role and in a Supporting Role. But they didn’t make it to Best Picture. I didn’t really understand why… Like with Gone Girl – I also didn’t get why it hasn’t been nominated since the Academy can nominate up to ten contestants and this year there were just eight. Anyway… To the movie!

Based on a true story, it pictures a period in the life of multimillionaire John du Pont, astonishingly played by Steve Carell. Before I watched it, I read that he put on a prosthetic nose, which, along with some super heavy makeup, really helped him bring the character to life. Even if it’s all true, his performance is irreproachable. He masters every blink of his eye. His body language is perfect. He dances perfectly as the shallow, crazy megalomaniac he plays.

John du Pont was an Olympic wrestling enthusiast. What did he do then? He went after the best wrestlers in the U.S. and brought all of them to live and train in his estate, setting up a team to represent the country in world championships. Du Pont was able to bring the Schultz brothers Mark (Channing Tatum) and Dave (Mark Ruffalo), both medalists in the previous Olympics. That’s where it all starts…

If you have no idea what happened between them, don’t google it. Don’t ask about it. I believe the film will be much more interesting if it’s a surprise. I had no idea, and the end made it worth the tickets. I mean, I didn’t really enjoy it. Too slow (again). The cast is great though. And biographies are always worth watching!

I also like Sienna Miller‘s appearance. She has almost no lines, three tops. But she’s there, present. She plays Ruffalo’s wife. They tried to make her a bit ugly, which is impossible! And I loved her there… Very small, but super valuable character. I think I liked it that much because of its unpredictability. She’s there, like a Greek Goddess, as always. But a bit deconstructed. I mean, there’s nothing much to it. It was just good to see my fashion muse at the movies again. Long time no see…

Anyway, the film is all about the boys! The three of them nail it! Especially during the silent moments, that let the eyes, body and breath talk.

So beautiful to see… The relationship between the two brothers… You wanna die with all those cute moments!

How about you? Have you seen it?

What’s your favorite so far?