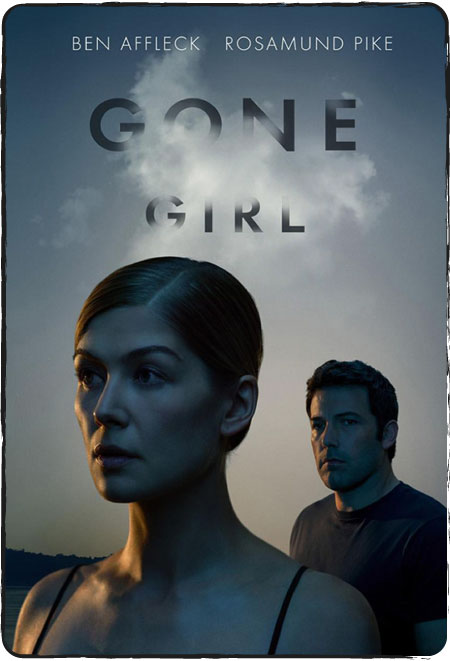 Keeping up with my Oscars Marathon, yesterday I watched Gone Girl. Should have seen it a while ago but I kept postponing it… As soon as it went off, my accent teacher in New York (I was living there when the film was launched!) got to one of our classes completely hypnotized by the movie. Crazy. Nuts. Saying it was one of the best things she’d ever seen, best movie of the year, unbelievable and all that. It got me curious!

It was one of those months, with classes all day long, and several texts to memorize so I postponed it. I didn’t have the time. But I kept hearing from friends how incredible it was. Only two of them hated it. Among a bunch of others who loved it. But it was such an intense hate that it made even more curious. Expectations going up.

Then, it launched on Apple TV. I saw the ad and bought it a bit recklessly. So, yeah, it was a pre-order. That means the film wasn’t available. I paid US$ 20 and it just became available these days. Can you imagine how angry I was? I was so furious that I held on to my curiosity a bit more and waited for it to become available so I could at least honor the US$ spent and watch it properly on my TV, in HD.

So I finally watched it. With my family, here in São Paulo. And I really enjoyed it. Pretty good. Didn’t go crazy about it though. My 2014 favorite is still Boyhood. My Oscar winner!

But now to Gone Girl…

Great film! Almost three hours long, but we flow with it. At least I did.

It’s based on the homonymous book by American journalist (and also screenwriter for the film) Gillian Flynn, which sold over six million copies worldwide. It has Ben Affleck and Rosamund Pike as the leads and David Fincher as the director.

The film starts with the couple’s five-year anniversary. And it starts by showing us how the marriage is not going well, with Ben’s character boozing up and opening his heart to his sister, at the bar they own together. He gets home afterwards, only to find it all torn out and his wife missing. That’s when the movie really starts.

What happened to Amy? Was she kidnapped? Murdered? Who did it? We spend most of the time without knowing it. Even the husband is a suspect. I loved the cynicism with which they criticize the media’s sensationalist coverage, which turns the investigations almost into a reality show. Social media, hypocrisy, everything we watch from home on our daily lives.

To me, the film’s great deal is, more than “what happened to Amy”, “what happened to their marriage?”. That’s what got me the most. The beginning of their relationship is so perfect. It all seems to fit so well. Perfect couple. So I got really intrigued trying to understand at which moment it all fell apart. What was the path they walked through those five years to get to this place where they no longer could stand each other. We all know a story like that, right? So…

I loved the soundtrack. It’s a perfect background for the mystery scenes. I also really like the actors. At the beginning I turned my nose up at the actress (don’t ask me why, but she’s not really captivating. Didn’t make me want to stare at her) but I soon got used to her. And it wouldn’t be fair to go without mentioning her character’s progression. There’s a reason for her being nominated for best actress. I can’t say much more, you should watch it to understand, but she nails it. Incredible ups and downs.

Now, what a b*shit ending! If you saw it, you’ll understand. I won’t give spoilers, I promise.

They couldn’t just leave us like that, without an explanation. That’s just not right! I think we deserved to know some more. Agreeing or not, approving it or not. We deserved a bit more information, I think!

But I enjoyed it very much, regardless of that. Highly recommend it. A must-see!

Have you seen it? Did you enjoy it?