Think of a happy girl!

I mean, I didn’t love this year’s line up. There are some stuff I love and want to see, but nothing like wowwww, you know? Like last year, when I wanted to see it all at the same time right now.

So I did my homework.

I went after my friend  Lucio Ribeiro (badass music journalist – his blog is the best on the subject: popload.com.br) to ask for a little help and make the most of my festival time.

He gave me a list of must-sees and I added some stuff, of course! Like Florence, which didn’t make it to the list! How come? Can you imagine that fairy singing in the desert? Ohhhh! He’s too cool for school but we love him anyway.

So now we have a harmonic list: the no-brainers we love and those we’ll love as soon as the concert’s over! The kind of stuff we love but don’t know yet, you know? Lol. So I always follow Lucio’s lead!

He’s ALWAYS right! He tells me to listen to stuff, I ignore them – due exclusively to my lack of time or memory – and then a couple months after I’m just going crazy for a concert of the band he told me to listen to much much earlier, before it was cool.

So if you’re heading to Coachella, take notes:

SYLVAN ESSO: I found this on the internet: Filled with sweet beats, Sylvan Esso has a minimalist experimentalism that makes you flow and take a moment to chill. Makes you want to listen to it, doesn’t it?

TAME IMPALA: Do you remember I saw this concert in New York and went nuts?! Even wrote about it here! Those guys are genius!

CARIBOU: Countless people mentioned this guy to me. And after Lucio’s note below, it made it to my top 3 “can’t miss”. Can’t wait!

Lucio’s Note: The ultimate vibe-inducing concert to see at Coachella. Electronic music for those who enjoy indie.

FLYING LOTUS: The guy’s an American rapper and producer. I know nothing about him. He’s playing at this year’s Tomorrowland Brazil.

Lucio’s Note: If Skrillex were cool and not just a party boy, he’d play like this guy.

KELE: Lucio wrote the following in his blog: one of the coolest voices at the new rock when rock was new, around 2006. Goes from indie to dance, from infectuous dubstep to XX-ish silence.

Lucio’s Note: The guy from Bloc Party (does anyone know what Bloc Party is? That’s what I thought). Has a big presence and good songs.

GLASS ANIMALS: L-O-V-E IT! And never seen it live! It’s on Saturday!

Lucio’s Note: One of the best newbie English bands.

JUNGLE: I stole some info from Lucio’s blog again: The place of the English band Jungle in today’s pop scene is close to their neighbors Disclosure, but more organic and even more R&B/Soul, which brings them closer to Australian artist Chet Faker, in a way. More dance like the first and less dramatic than the latter. What? Chet Faker meets Disclosure? RSVPed along with the musicians themselves!

Lucio’s Note: Plays in Rio in May, mandatory. Dance revolution.

ALT-J: SO sad I missed it at Lolla. It was almost over when I got there. It’s my friend’s (one whose musical taste is pretty similar to mine) favorite band ever! Can’t miss!

FATHER JOHN MISTY: B-A-B-E. We’ll find out about the music in the concert!

Lucio’s Note: Babe alert. (Yayyyy! Thanks for the tip, Lucioooo!) He’s behaving like a band singer, but the real magic happens when he presses buttons.

ROYAL BLOOD: Know nothing about them and neither did Lucio make any remarks. But it made it to their “can’t miss” list.

CHET FAKER: Love him!!!! I’ve just seen the concert in Rio and FELL SO HARD! I also wrote about him here!

THE WAR ON DRUGS: One of the highlights of 2014, well-ranked on the most relevant lists of the year (last year), Always making it at least to the Top 10.

RATATAT and PERFUME GENIUS: Other two names I know absolutely nothing about and didn’t get a caption from Lucio. Which means we’ll have to see and tell afterwards. 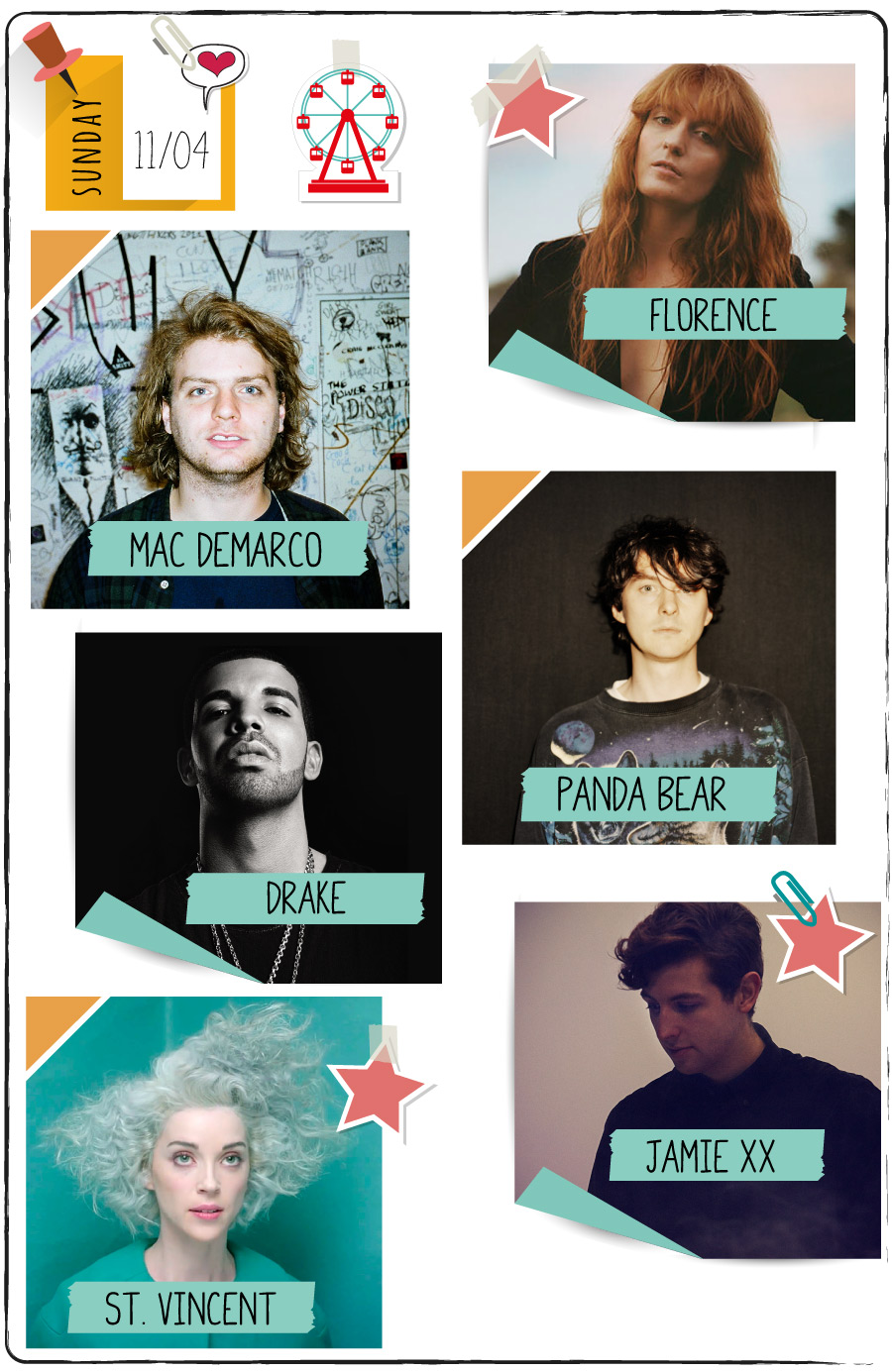 FLORENCE: My muse, my goddess! I’ve already seen about four Florence concerts and just can’t get enough! She’s a floating fairy onstage. What can I say about a concert of hers on the desert? That’s going to be special!

MARC DE MARCO: Kinda cuckoo and psychedelic, he’s one of the most noticeable names of the new indie!

PANDA BEAR: It’s the drummer and founder of Animal Collective, Noah Lennox, who picked 2015 to dedicated to his new solo project.

JAMIE XX: Just ‘cause it’s the guy from The XX, I’m in. Don’t need further explanations!

Lucio’s Note: From the xx, is launching the best record of the year, which no one has yet listened to.

ST. VINCENT: Another one I’ll never forgetting myself of having missed at Lolla. She was playing on a stage super far from where I was. The girl is said to be the “hottest right now“. Dying to see her!

Now I just have to pray for the concert times to be manageable so I don’t need to choose between concerts!

Another good tip (if someone doesn’t know it) is to download the COACHELLA app and create your own line up! You pick what you want to see (I’ve already put all those on my list) and he tells you the hours and stage of each concert. It’s super practical. Really helps us out.

Now I’ll say goodbye to you for I’ll be missing out from here until Monday or Tuesday, probably, when I’ll come back with the full coverage of COACHELLA 2015.

‘Til then, I’ll be enjoying the festival to the fullest! ♥