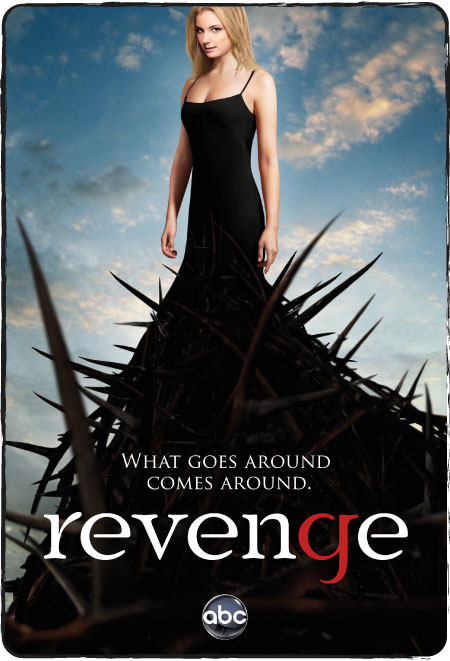 OH-MY-GOD, did I love Revenge! I just, just loved it! From the bottom of my heart!

And it was you who recommended it to me! When I wrote about Grey’s Anatomy here I got a lot of comments with TV show recommendations to make me get over my abstinence syndrome. And Revenge was one of the top mentioned ones. So I started watching it right before I came to NY.

For those who haven’t seen it yet (start right away!), the show’s title is totally self-explanatory. Revenge is all you should expect. Forget about love stories, romance… Forget about all that! I actually had a hard time seeing the lead letting so many hot guys slip away because all she could think of was revenge.

I’m talking about Emily Thorne. Who’s actually Amanda Clarke but swaps her identity to get back at the people who destroyed her family and caused her father’s death.

No spoilers so far! It all happens in the first episodes. Her father goes to jail under false accusations of terrorism. He was sentenced to prison and murdered there. Amanda (who calls herself Emily since episode one!) spends her life between orphanages and reformatories. Then, when she turns 18, she’s released and receives her father’s inheritance: a box with all the notes e details about the people who ruined his life, along with a few million dollars. That’s it. Enough material for her to start planning her crazy revenge.

I LOVED the first season more than brigadeiro. It’s the best in my opinion. There are three of them so far. I think the reason why I love the first one so much (minor spoilers coming up!) is that she almost gets off track for getting involved with (babe alert!) Daniel. She slipped at that point. Her emotions almost got to her reason. And that’s how I roll. Super romantic. So I really wanted them to stay together for good. I swear. I’m totally team Daniel.

Then in the second season there’s Aiden (so boring! Absolutely nothing special about him. You said I’d go crazy with his accent and all… No chemistry at all between them), Amanda (equally dull) and some other characters.

This season was weak. Didn’t enjoy it… But the second half flowed better. And then, the third… Brought all my excitement back! I still think the first season is the best, but the third was pretty good as well. Because we are able to see the plot moving forward. We don’t feel stuck. It just flows. That’s how I like it.

I finished the third season yesterday and I’m DESPERATE about the fourth. God, how can I deal with it? Apparently it will be off on September 28 in the States and that’s all I can think of!

So here I am looking for another show to fill this hole Revenge left in my heart! There are some Grey’s episodes I haven’t seen but not even that appeals to me. It’s like I’m mourning!

PS: It was just after I finished writing that I realized I didn’t mention Nolan! And I can’t leave it at that. He’s my favorite character. I wish so badly I could have have a Nolan to call my own. Jack was missing too, right? He’s incredible, oh-so-charming, but I really need him and Emily to get together soon so I can draw my conclusions. I think their time will come in the fourth season. Until there, I remain team Daniel. Even after they try to make him ugly and a super boring villain, I root for him and Emily to live happily ever after!