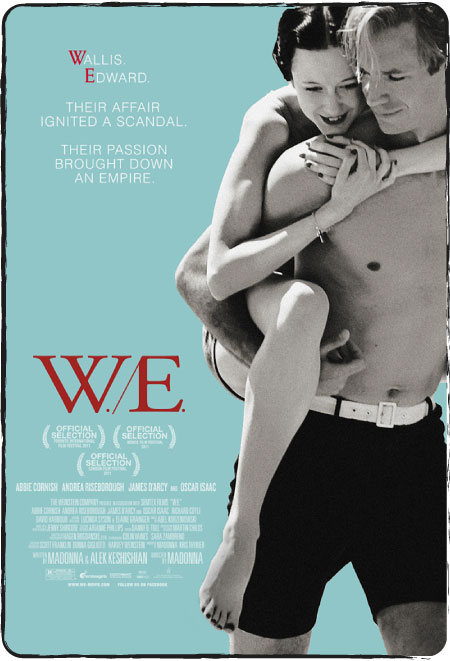 When I went to see Madonna’s W.E., I kind of didn’t know what to expect. It was her second adventure in directing, after Filth and Wisdom, in 2008 and I didn’t want to miss it. But I didn’t have the highest expectations either.

One of them is the romance between Wallis Simpson, an American plebeian, and King Edward VIII in the 1930s – which made him abdicate in order to live this love story. Remember The King’s Speech? Colin Firth’s fantastic performance as Edward’s stuttering brother, who ascended to the throne in his place and became the King. So fantastic that got him the Academy awards for Best Actor!

Back to W.E, the focus is on Wallis (Andrea Riseborough): divorced, lover of a nobleman, responsible for radically changing the history of the British monarchy. The feeling we have is that Madonna wants to tell the story from another point of view. She totally takes sides.

Then the script jumps to the 1990s to tell the story of Wally Wihtrop (Abbie Cornish), a New Yorker who’s obsessed with the story of the first couple, while living a ruined marriage and then falling in love  with a Russian security guard.

The swing between times, which could have been amazing, became pretty confused. There are some really weird takes. The handheld camera makes us dizzy at some points – that’s how bad it is. Gosh! Not cool.

That’s not to say the movie is a complete failure. The cinematography was pretty great. Beautiful colors. Amazing treatment. Love it. Andrea Riseborough’s performance is special too. And the costume dressing (a well-deserved Oscar nomination!) makes it worth the ticket!

It was developed by Arianne Phillips (who takes care of Madonna’s costume dressing and had been previously nominated for Walk the Line and A Single Man).

In my super humble opinion, Madonna is better off like a music star!